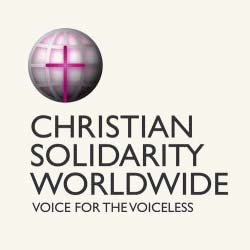 Christian Solidarity Worldwide (CSW) works in over 20 countries across Asia, Africa, the Middle East, and Latin America, defending everyone’s right to freedom of religion or belief.

Three quarters of the world’s population lives in countries with severe restrictions on their religious freedom—in fact, it’s one of the most widely-violated human rights in the world.

CSW working to change this. It envisions a world where everyone is free to choose their beliefs—to hold and practice any religion they like, or none at all.

As an advocacy organization, CSW aims to influence governments and other bodies on religious freedom issues to ensure that the voice of the persecuted is heard in the international arena. Through its various resources, events, and initiatives, CSW also aims to mobilize the general public to pray, protest, and provide on behalf of persecuted Christians. By doing so, CSW and its supporters stand in the gap to provide solidarity and support to those in need.