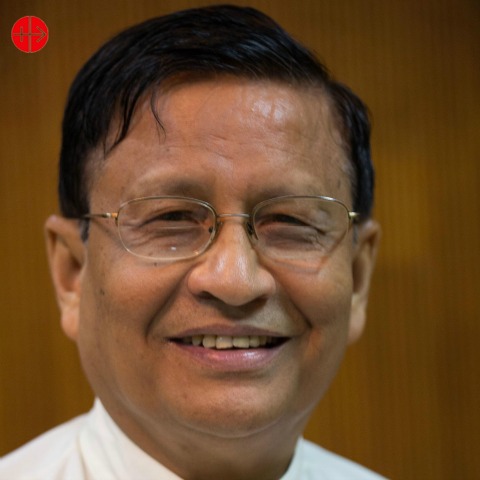 Cardinal Charles Bo is Myanmar’s first Roman Catholic cardinal. He was ordained a Salesian priest at Lashio, Northern Shan State, on April 9, 1976. After ordination, he was parish priest of Loihkam from 1976 to 1981 and in Lashio from 1981 to1985, he was posted to Anisakan as a formator and rector of the Anisakan Salesian Seminary. He served as apostolic administrator in Lashio from 1985 to 1986 and as apostolic prefect from 1986 to 1990. He was ordained bishop of Lashio in Shan State on December 16, 1990. On May 24, 1996 he was transferred to Pathein diocese in Ayeyarwaddy Division and was installed as the bishop of Pathein on August 25, 1996. As bishop of Pathein, he was appointed apostolic administrator of the Lashio diocese from May 1996 to November 1998 and of the Mandalay archdiocese from April 3, 2002 to June 2003. On May 24, 2003, he was appointed archbishop of Yangon and was installed on June 7, 2003. Pope Francis named the archbishop the first cardinal of Myanmar on Jan. 4, 2015. Archbishop Bo is now the secretary general and treasurer of the Catholic Bishops' Conference of Myanmar (CBCM). He is also the head of the Commission for Seminaries (Theologate), chairman of the Episcopal Commission for Inter-religious Dialogue (national level), chairman of the Formation of Formators, and chairman of the Public Relation Commission. He is serving as the head of the Office of Human Development in the Federation of Asian Bishops' Conference (FABC), as a member of the Commission for Religious in FABC, and as a member on the Pontifical Council for Inter-Religious Dialogue.