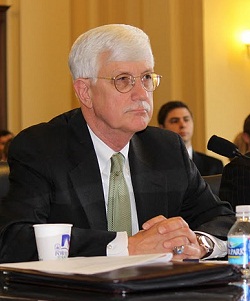 Thomas F. Farr is an associate professor of the practice of religion and world affairs at Georgetown’s Edmund A. Walsh School of Foreign Service and director of the Religious Freedom Research Project at the Berkley Center. Farr is also president of the Religious Freedom Institute, an NGO committed to achieving worldwide acceptance of religious liberty. From 2011 to 2016 he was director of the Religious Freedom Project at the Berkley Center for Religion, Peace, and World Affairs. Farr is a senior fellow at the Institute for Studies of Religion at Baylor University, and at the Witherspoon Institute in Princeton, N.J. Farr received his B.A. in history from Mercer University, and his Ph.D. in modern British and European history from the University of North Carolina.