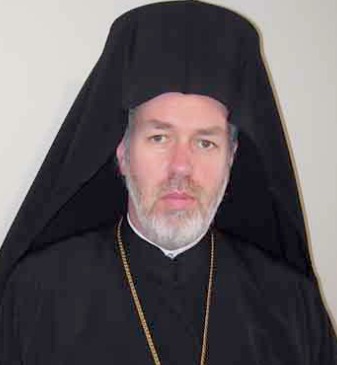 Metropolitan Athenagoras of Belgium, Exarch of Benelux is the Exarch of Benelux. In November 1989 he was ordained deacon by Metropolitan Bartholomew of Philadelphia, presently the Ecumenical Patriarch, who also gave him the name of Athenagoras in honor of the great Patriarch Athenagoras. Later, Metropolitan Panteleimon of Belgium ordains him as priest. In September 1996 he is promoted as Archimandrite and then Epsicopal Vicar of the Archdiocese (Benelux). For more than five years he functioned as religion teacher in different high schools in Flanders. At the beginning of 1994, Metropolitan Panteleimon nominated him responsible producer for the Belgium radio and television Orthodox broadcasts in French and Flemish. In the same year, the Holy Synod of the Ecumenical Patriarchate nominated him as collaborator of the newly established Liaison Office of the Orthodox Church to the European Union, located in Brussels. By 1995, deacon Athenagoras Peckstadt had founded with the blessing of Metropolitan Panteleimon, an Orthodox parish in Bruges, under the patronage of the Saint Emperors Constantine and Helen, where he served as the first Dean. He functions as Orthodox Chaplain of the International Airport of Brussels since several years. He is also a member in the Concertation of Christian Churches in Belgium, in the Committee "A Soul for Europe" and President of the E.I.I.R. (International and Interconfessional Association for Meetings of Monks and Nuns), after serving as President of the Interecclesiastical Committee of Brussels. He speaks fluently Flemish, Greek, French, English and German. On the 13 May 2003 he was unanimously elected by the Holy Synod of the Ecumenical Patriarchate of Constantinople auxiliary bishop of the Metropolitan of Belgium with the high title of "Bishop of Sinope". The new Bishop carries on most of his former duties. He was ordained on Sunday 22nd June 2003 in the Orthodox Cathedral of Brussels.