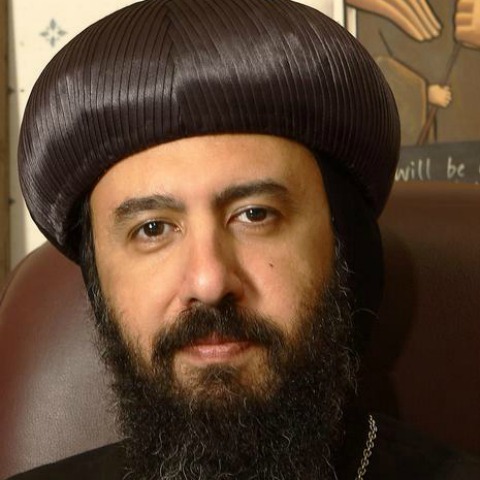 General Bishop of the Coptic Orthodox Church in the United Kingdom

Bishop Angaelos is General Bishop of the Coptic Orthodox Church in the United Kingdom, the ancient Church of Egypt founded by Saint Mark the Apostle around 55 CE, and the largest Christian denomination in the Middle East.

Bishop Angaelos was born in Egypt and emigrated to Australia during his childhood with his family. In 1990, he returned to Egypt to the monastery of St Bishoy in Wadi-El-Natroun, where he was consecrated a monk by the late Pope Shenouda III. He served as his private secretary until 1995 when he was delegated to serve a parish in the United Kingdom. With a pastoral ministry spanning two decades, Bishop Angaelos travels extensively around the world to speak at youth conferences and conventions.

Since being consecrated General Bishop in 1999, Bishop Angaelos has been ecumenically active at local, national, and international levels, while also working extensively in the area of inter-religious relations. He works tirelessly to build bridges and promote dialogue and unity between churches, faiths, and communities in the United Kingdom and has established and maintains contacts with governmental, inter-religious, and ecumenical bodies. Under his leadership, the Coptic Orthodox Church is now a member of all the official ecumenical instruments in the United Kingdom and the Republic of Ireland.
Specializing in initiatives relating to advocacy, human rights, international religious freedom, and development work, he is a member of numerous local, national, and international bodies dealing with these matters. Bishop Angaelos is the founder and convener of the Asylum Advocacy Group which works closely in partnership with the All Party Parliamentary Group on international religious freedom. In June 2015, it was announced that he would be conferred with the honor of Officer of the Most Excellent Order of the British Empire, by Her Majesty the Queen, for services to international religious freedom.
As the director of the Coptic Media and Communications Office in the United Kingdom and Europe, Bishop Angaelos frequently issues statements and comments relating to current religious and minority issues, with a particular focus on dialogue, conflict-resolution, and reconciliation. His comments and views are frequently sought on matters of human rights, civil liberties, and international religious freedom, particularly in relations to the situation in Egypt, the Middle East, and North Africa.